“Are you going to fight — or are you just going to throw up your hands and surrender?” That’s the question rolling around in my brain this morning. What about you? Are you discouraged, disheartened, even defeated? Have problems in your life, work, family, friendships got you down?

People who know me will tell you that I’m usually a positive person. But there’s times when I worry and fret just like most people. I’ll be perfectly honest with you; this past month has been extremely difficult for me. But not because of things that are actually happening, but I’ve actually been overwhelmed by stuff THAT HASN’T EVEN HAPPENED YET!

You ever do that? Worry so much about the future that you almost break out in a cold sweat and just want to find a safe place to crawl away to and hide? As I said, that’s not a problem I usually have to deal with, but I confess a whole lot of terrible things happening to friends, to my family, and even to our country has caused me to drop my defenses and I’ve allowed fear to take root and threaten to overwhelm me.

I have a bramble thicket in my yard. It was already there when I moved in, right on top the hill that separates my yard from my neighbor’s. It’s a big area, probably 25 by 80 feet and pretty much impenetrable. I’m serious, even my dogs can’t get through it and I swear the rabbits laugh at them from the safety of the thorn bushes. That thicket was probably half the size when I first bought the place, but each year, against my best efforts, it’s managed to further encroach upon my property. Left alone I’m sure it would have swallowed up my utility shed by now!

So what do you do when your thicket gets too big, too strong, and too thick to handle? Well, I’ll tell you what I did, I borrowed a bulldozer! Actually, it was friend’s Kubota tractor with a scoop on the front, but the same principle applied. I drove through that “impenetrable” thicket like nobody’s business. Score = Larry:1, Thicket:0. 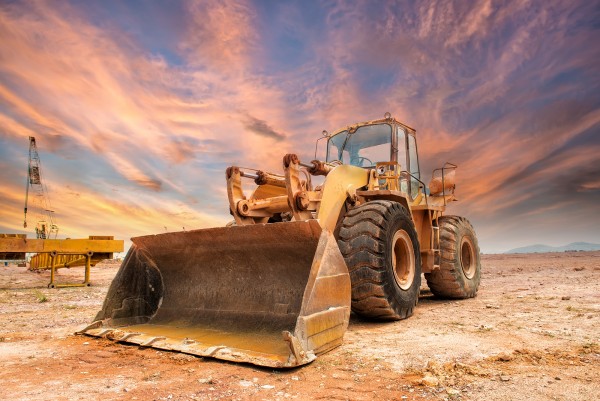 I guess what I really needed to remember this morning is that things aren’t always as difficult or even as impossible as they may seem. Sometimes we just need to change our tactics, stand and fight back against the things in our life that seek to overwhelm us, devour us and our families. “For God hath not given us the spirit of fear; but of power, and of love, and of a sound mind.” (2 Tim 1:7).

“Then Elisha prayed, ‘O LORD, open his eyes and let him see!’ The LORD opened the young man’s eyes, and when he looked up, he saw that the hillside around Elisha was filled with horses and chariots of fire.” (2 Kings 6:17)

The truth is, we usually think we’re all alone when we’re under attack and we might not be able to even fathom how God can help.

That’s what happened to Elisha the prophet and his servant as told in the Old Testament. The nation of Aram was always at war with Israel. Yet every time they would attack Israel, God would tell Elisha what the king of Aram’s war plans were. So Israel would win every time. When Aram’s king learned that Elisha was the one giving away his plans, he sent his army after him. Elisha’s servant woke up one morning and went outside only to see that he and Elisha were surrounded by enemy troops.

Terrified, he ran back in and shouted at Elisha, “What are we going to do?” Then Elisha said something that must have seemed strange: “Don’t worry. The people on our side far outnumber those against us.” That really surprised Elisha’s servant cause as far as he knew; only two people (Elisha and himself) were on their side!

Then Elisha prayed, “O Lord, open his eyes and let him see!” (2 Kings 6:17). Suddenly, Elisha’s servant saw an army of angels on the hillside ready to fight for them.

Just like Elisha and his servant, we all have things attacking us right now. We’re tempted to panic. The truth is though; we have a whole lot more that’s for us than against us. But when we are in the midst of an attack, it’s awfully hard to see it.

God needs to open our eyes to all that is on our side. Like Elisha, we just need to ask him for help. Even now, I’m not sure how God can help me, how he can keep all of my fears and worry from coming to pass. But now that I’ve asked for his help and I put my trust in him, that’s His problem…